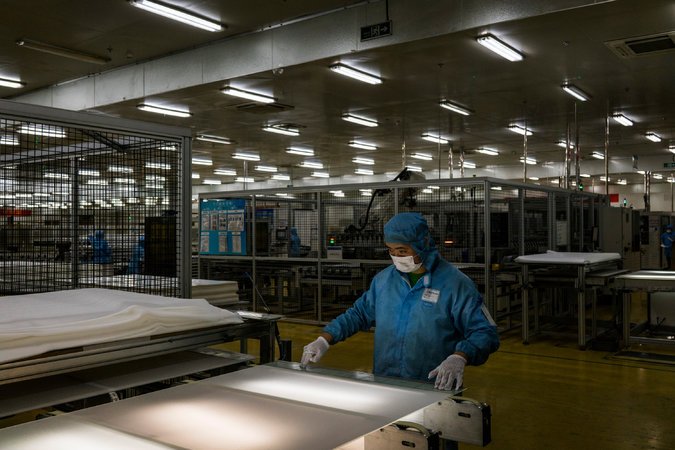 SHANGHAI — China is the world’s No. 1 polluter. It burns more coal than the rest of the world combined. It produces more than a quarter of the world’s human-caused global warming gases, nearly as much as North America and Europe put together.

On Tuesday, the country set out to claim another title reflecting its ambitions to change all that: keeper of the world’s largest financial market devoted to cleaning up the air.

China released plans on Tuesday to start a giant market to trade credits for the right to emit planet-warming greenhouse gases. The nationwide market would initially cover China’s vast, state-dominated power generation sector, which produced almost half of the country’s emissions from the burning of fossil fuels last year. If it works as intended, an emissions market will give Chinese power companies a financial incentive to operate more cleanly.

The long-awaited announcement could bolster global efforts to combat climate change after President Trump signaled this year that the United States would back away from Obama-era promises to curb emissions. It could also serve as a big — though ultimately government-controlled — laboratory for such carbon markets, after earlier efforts in Europe and at the local level in China stumbled.

“China’s move to create the world’s largest carbon market is yet another powerful sign that a global sustainability revolution is underway,” Al Gore, the former vice president and a prominent voice on the environment, said in a statement.

The government did not issue a hard timeline, and regulations and other details still have to be worked out. But environmental groups that worked with the government said they could emerge in the next couple of years. “Everything is gradual, step by step,” said Li Junfeng, a senior government adviser on the carbon market plan.

China’s announcement could also disappoint those who were hoping the long-promised emissions market would cover the country’s broader economy, the world’s second largest after that of the United States. China’s booming car culture, its industrializing agriculture sector and its huge chemical complexes, cement factories and steel mills are also big emitters.

“This is like the Mount Everest of climate policy,” Mr. Keohane said. “It’s an incredibly ambitious undertaking.”

China is reacting to pressure at home and abroad to clean up its act. Rising sea levels could devastate its heavily populated coast. The Chinese public is increasingly worried about broader environmental issues like urban smog, water quality and soil pollution.

China has invested heavily in green technologies such as electric cars, wind turbines and solar panels.

China’s emissions of greenhouse gases from the burning of fossil fuels like oil, coal and natural gas have nearly tripled since 2000, according to data from the International Energy Agency in Paris. The high tonnage partly reflects its huge population; Chinese emissions per person are still somewhat less than the average per capital figure in the United States, although the gap has been narrowing.

Under emission markets, power companies and others effectively pay for the right to pollute beyond a government-mandated limit. Those that cut their emissions could sell permits to pollute to dirtier companies, ideally at a healthy price.

So far, such efforts have been underwhelming. Markets in Europe and at the provincial level in China have faltered because the authorities issued too many credits to existing polluters. That gave companies little reason to buy credits, or to cut their own emissions and sell the credits.

Zou Ji, the president of the China arm of the Energy Foundation, one of several Western nonprofit groups that advised the government on the new market, said that China was likely to issue many credits starting early next year in response to domestic political pressures, and then gradually tighten annual allocations to force up the price.

Beijing officials had been signaling for many months that the country would move beyond its existing experimental markets for emissions rights in five cities and two provinces. These provincial programs cover a variety of sectors, including electricity generation, steel mills, cement factories, chemical complexes and other energy-intensive industries. But the trading volume has been very low, with just $400 million in credits traded on all the exchanges combined in the first four years through last June, according to monitoring funded by the World Bank.

The national market could face its own political interference that could hurt its chances of becoming a model for others. Electricity generation in China from coal and natural gas is dominated by five giant, state-controlled companies. A sixth runs the civilian nuclear power sector. Regardless of effectiveness or economics, the companies will probably do what Beijing wants them to do.

Beijing’s efforts also sometimes go awry. Just in the past few weeks, China has had to retreat temporarily from an ambitious plan to cut coal use in some parts of the country and rely more on natural gas, which produces fewer emissions.

“I don’t take the carbon market seriously,” said Derek Scissors, an economist who specializes in China with the American Enterprise Institute, a conservative think tank. “The first thing I would ask people is, ‘What markets in China do you think work really well?’ ”

The national emissions trading system being started will initially cover power companies that emit at least 26,000 tons a year of carbon — the equivalent of burning 10,000 tons of coal a year, and a threshold high enough to cover mainly larger users of coal and natural gas. Experimental markets in the seven original provinces and cities, which further cities and provinces are starting to replicate, will continue to cover the cement and steel industries as well as other manufacturing and industrial sectors. The goal is to eventually move them into the national market.

Beijing already regulates emissions from China’s electricity sector. On the other hand, having them trade with each other might help the central government figure out more rules to regulate trading in less regulated sectors, and also to identify which companies are the most efficient at reducing emissions.

The announcement comes as the United States under Mr. Trump prepares to eliminate an Obama-era plan for reducing America’s emissions. The United States has also removed climate change from its new national security strategy and has vowed to abandon the Paris agreement, under which nearly 200 nations pledged to curb greenhouse gases voluntarily and help poor countries cope with the consequences of climate change.

Asserting that the world’s two largest economies must act together, the United States and China in 2014 jointly announced their emissions targets as part of the Paris agreement. China has previously promised that its carbon dioxide emissions would peak by 2030, and that it would increase its share of non-fossil fuels in its primary energy consumption to about 20 percent by that year.

Kelly Sims Gallagher, a professor of environmental policy at Tufts University, said the Chinese government was right to be cautious by starting with just the electricity sector. Taking a good inventory of emissions, ensuring the cap is set at a level that will actually spur a reduction in carbon dioxide and sorting out emissions allocations are all complex tasks that take time, she said.

“It’s important to realize you can’t do that overnight,” Ms. Gallagher said.