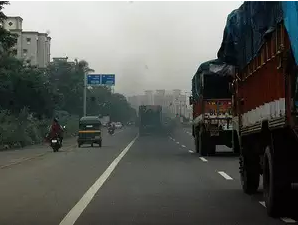 While the world has been preoccupied with reducing carbon dioxide in the atmosphere, which is generated by burning fossil fuels, sulphur dioxide (SO₂) emissions have not received the same attention. Produced by burning coal, wood, petrol, diesel or farm stubble, SO₂ forms a large part of the pollution haze enveloping cities in northern India every winter.

Most of the SO₂ in Indian skies is emitted when power plants burn coal to produce electricity. Typically, coal contains 3% of sulphur, but coal from Assam in India is known to have higher content.

Now, a new study by the University of Maryland shows that India has caught up with China as the biggest emitter of sulphur dioxide and is poised to overtake it. It shows that India and China are on “opposite trajectories” so far as these emissions are concerned. Since 2007, emissions in China have declined by three-quarters, while those in India have increased by half.  See: India’s coal sector seeks to avoid emission norms

Sulphur dioxide harms human health, besides causing a haze. When it combines with moisture in the atmosphere, it forms acid rain, which is what caused a major concern in the 1970s regarding the threat to the marble façade of the Taj Mahal in Agra, a fear which persists today.

The US researchers collected emission data from inventories of the number of factories, power plants, automobiles and other contributors to SO₂ levels. These findings were then enhanced due to advances in satellite measurements. For SO₂, the researchers have used the Ozone Monitoring Instrument (OMI), which first produced evidence that China had started to reduce emissions in coal-fired power plants by installing flue gas desulphurisation (FGD) devices, along with reductions in such emissions from US plants.

They state: “More recently, a new technique that combines wind and improved SO2 data was employed to develop an OMI-based emission catalogue for nearly 500 sources around the globe. This technique enabled the detection of ~40 sources missing from the conventional bottom-up inventories.”

Satellite images for China and India contrast their 2005 and 2016 positions. In 2005, China has a “vertical column density” of SO₂ in bright crimson and even purple, depicting heavy emissions in eastern regions, while India has tiny swathes of green in eastern and central parts of the country. By 2016, however, the situation has changed, with the same Chinese areas now red-orange, while India’s affected areas have grown and have turned purple-red in density.

In 2005, almost the entire North China plain was affected, with two provinces particularly acute due to several power plants as well as coking and cement industries. Eleven years later, there were virtually no hot spots there, while the two provinces recorded sizeable reductions.

The researchers used the OMI data to extrapolate each country’s total emissions. SO₂ emissions from China peaked at 36.6 million tonnes (Mt) a year in 2007 and have since been generally decreasing. At 8.4 Mt, the level in 2016 is a quarter of that in 2005. “The decrease reflects stricter pollution control measures, coupled with a gradual shift to other, non-coal-based energy sources, and the recent slowdown of the Chinese economy,” say the researchers. “Since the early 2000s, the Chinese government has introduced, for example, policies to reduce SO2 emissions and a new national air quality standard for fine particles. Electricity generation in China grew by more than 100 per cent during 2005–2015, but coal consumption increased by ~50%. The brief period of emission growth in 2009–2011 can probably be attributed to government stimulus in response to the global financial crisis of 2007–2008.”

By contrast, India’s emissions have steadily growth throughout this period. For 2016, the emissions from India are roughly the same as China’s. “If the current trends continue, India will emit significantly more SO2 than China in the coming years… We arrive at the same conclusion that India is becoming, if it is not already, the world’s top SO2 emitting country,” they estimate.

The study also measured the population exposed to SO₂ levels. In the past 10 years, such loading diminished by a factor of five in China, but it increased by a half in India. In China, over 450 million people were exposed to very harmful levels of SO2 in 2013, but this number decreased to 99 million in 2016. At a lower level, the 190 million in China in 2013 fell to 13 million in 2016, a “remarkable drop” of over 90%.

In India, 0.7 million people were exposed to the lower level of SO2 in 2013. In just three years, however, this has grown to 3.8 million. The exposure in India is limited because the current hot spots are relatively less-densely populated, though that may change over time as electricity consumption grows and spreads throughout the country.

There is a slight blip in this scenario, however. According to the just-released 2017 Global Carbon Budget, “The most significant factor in the resumption of global emissions growth is the projected 3.5 per cent increase in China’s emissions (which would include some SO₂). This is the result of higher energy demand, particularly from the industrial sector, along with a decline in hydropower use because of below-average rainfall. China’s coal consumption grew by 3%… The 2017 growth may result from economic stimulus from the Chinese government, and may not continue in the years ahead.”

“The causes of continued coal use are clearly the growing energy needs. We are not alone in this. Even Germany is using coal doing despite tall claims of how progressive it is on climate action. Renewables are growing at impressive rates in India and China but both remain the most polluted countries. Already more than a million deaths are counted as premature and attributed to air pollution. What’s going on in Delhi is an example even though it is not directly related to coal burning. But a lack of power to dispose of crop residue in a more benign way and not having enough electrical vehicles are part of the bigger picture of why we continue to rely on coal,” Raghu Murtugudde, also from the University of Maryland, told indiaclimatedialogue.net. “The consequences are that even when rich countries wean themselves off coal, we will be tempted to continue since they will export coal at cheaper rates! The US already did that to Germany under Obama who was also climate-friendly.”

“We are on our own when it comes to our air and water quality. We must note the population-weighted emissions increasing, which indicates higher exposure to a larger population. This paper does not get into the circulation changes by season so we may even be getting pollution sweeping in from China during the northeast monsoon,” he said. “The India Meteorological Department and Indian Institute of Tropical Meteorology have to get more seriously into modelling and forecasting air pollution, especially remembering that the aerosols (airborne particulates) are already found to be partially responsible for solar dimming, reduced land-ocean thermal contrast and the resultant decrease in mean monsoons. The remote impacts that control the widespread floods and the mean monsoons as well as the potential for injection of pollution from remote locations make it even more important that we stay on top of what we can control — like our own clean energy and environmental regulations and forecasting.”

“The northeast monsoon (or Asian monsoon in general) may transport some pollutants emitted from China to India, but the effects are unlikely to be important for air quality near the surface in India, since the Tibet Plateau will block the near surface air flow. Also, SO₂ is a short-lived pollutant, so what we observed from satellites is mostly related to local emissions,” Can Li, lead author of the study from the University of Maryland and NASA Goddard Space Flight Centre, told indiaclimatedialogue.net. “The transport of air pollution from China mainly affects regions to the east (Korea, Japan, and further downwind including the US, there are hundreds of studies on this subject), and in some cases Southeast Asia.”

More than two-thirds of India’s electricity generation capacity comes from thermal power plants, with about 85% of the country’s thermal power generation being coal-based. The 10 biggest thermal power stations operating in India are all coal-fired, with seven of them owned and operated by state-run NTPC.

“There is a Faustian bargain in that, to avoid catastrophic outcomes, we must cut emissions very rapidly, particularly from coal. However, this removes the aerosols (associated with SO₂), which will lead to a one-off increase in temperature and exacerbate the risk of catastrophic outcomes,” Ian Dunlop of the Climate Change Task Force in Australia and former Chair, Australian Coal Association, told indiaclimatedialogue.net. “But the longer action is delayed, the worse the bargain becomes, so we have to act to cut emissions as rapidly as possible.”

“It is particularly important for India to act as soon as possible, and to avoid the high emission path which China followed, as the world has run out of time if we wish to have any realistic chance of staying below 2 degrees Celsius.(In the 2015 Paris climate agreement, all countries agreed to keep mean global temperature rise within two degrees Celsius from the pre-industrial level). You are of course already seeing exceptionally high temperatures in parts of India during the summer months.”