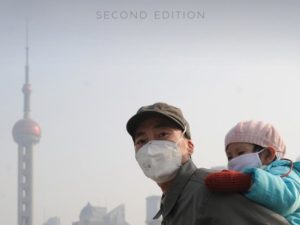 Judith Shapiro first became interested in China’s environment while teaching English in Hunan province in the late 1970s. It was here that she was inspired to write a book on Mao-era environmental degradation.  Now a professor of global environmental politics, she talked to chinadialogue about her latest book.

chinadialogue (CD): How have attitudes towards the environment shifted in China since the last edition of your book? [an earlier edition of the book was published in 2012]

Judith Shapiro (JS): The Chinese people have lost patience with the severity of the pollution problems, whether the constant “airpocalypses” and dead pigs dumped in the river near Shanghai, or chronic food contamination scandals. The emergence of social media and the “apps” that allow Chinese people not only to get access to detailed pollution information but also to share their own data have created a revolution in environmental information transparency. The main changes in the new edition of China’s Environmental Challengesare a greater focus on the environmental impact of China’s “going out” policy [the government’s strategy to encourage companies to invest overseas] and also updated information about the strategies and methods available to China’s environmental civil society. These methods began with standard “information politics” techniques adopted by Friends of Nature in the mid-1990s and have evolved into groundbreaking – methods such as   social media apps. New techniques also include the privately-produced “Under the Dome” phenomenon of March 2015 and the use of celebrities such as Yao Ming to try to change the shark-fin consuming culture.  The involvement of wealthy Chinese foundations in trying to solve China’s environmental problems also demonstrates a huge shift in the sense of urgency about the problems and empowerment of Chinese people from all walks of life.

CD: You suggest the root problems of China’s current environmental problems aren’t rooted in the economic or political system, but in limits to public participation and freedom of information. How is the growing environmental movement in China today opening up this space?

JS: There is still a tendency for Chinese policymakers and scientists to think about environmental problems as technical matters that can be resolved by better testing and improved pollution controls. When I have spoken to Chinese audiences, I have found that the insight that environmental degradation is a political, human-created problem, with winners and losers, is quite fresh in China. Notions like environmental justice and environmental racism, which explore how environmental harm is shifted to from more powerful to more vulnerable populations, are still quite new in China.  In my view, the Chinese people are still trying to figure out how best to participate in the political process.  For example, class action lawsuits are a new frontier for public participation. Environmental mass incidents remain extremely common, but they would be less necessary if there were better ways to deal with the corruption and disrespect for China’s excellent environmental laws that so often cause the problems to begin with.

CD: Why do China’s problems matter to the world?

JS: China’s environmental footprint is simply huge… it’s no exaggeration to say, “as China goes, so goes the planet.” Most obvious is climate change. China’s aggregate carbon emissions are now the world’s largest, and even in per-capita terms they have passed those of the EU. Fortunately, Chinese policymakers understand the enormous threat that the changing climate poses to Chinese national security. The more frequent droughts, floods, and typhoons, the dangers that sea-level rise poses to important cities such as  Shanghai and Guangzhou, the risk that Himalayan glacier melt will have such a great impact on North China’s water table that huge numbers of people may be displaced – all of these threats are well understood by the leadership.

But China’s environmental problems also matter because China’s newfound wealth has allowed investors to buy up grain fields, mines, forests, fisheries, and other natural resources worldwide.  How this investment is done, whether social and environmental considerations are sufficiently considered, all have great impacts overseas. Moreover, the ability of an increasing  middle class to pay for products such as  elephant ivory, shark fin and so on is decimating biodiversity in many parts of the world.

Finally, many of China’s environmental problems have regional impacts – for example, particulate air pollution which blows to northeast Asia, or dam-building which affects the flow of significant watercourses such as the Mekong (and even, perhaps, in the future, the Brahmaputra). This underscores the fact that China’s environmental problems should be of great concern to the whole world.  Ideally, we will recognise our shared interest in resolving them and work together to find innovative solutions. Perhaps someday China will design  an alternative development model that can inspire all of us and point a new direction towards intergenerational sustainability.

CD: Environmental justice is another key theme of your book. Can China improve its own environment without shifting pollution to poorer regions – either within the country or outside its borders?

JS: This is a critical concern. I am deeply worried that the so-called Nimby-ism (“not in my backyard”) that some have seen as a sign that the Chinese middle class is waking up to environmental problems (fighting landfills and incinerators, PX plants and so on) could simply shift the problems elsewhere. This would merely postpone our reckoning with the limits of the earth’s resources and global capacity to absorb our toxic products and waste. In my book, I detail how pollution is being shifted from major cities to suburbs, from cities to rural areas, from eastern China to western China, and from China to Southeast Asia, Africa, and other places where people are too poor or politically weak, or elites too corrupt, to say no.  During the 2015 “APEC Blue” summit, when Hebei was under great pressure to clean up its dirty skies, there was a lot of talk of moving the most polluting factories to Africa. We call this phenomenon “dirty migration,” and it’s really bad news not only for the people of Africa but for the planet.

CD: There has been a lot of focus on the negative side of China’s overseas footprint. What about the positive lessons China can offer other emerging economies such as India or Brazil as they face similar environmental challenges?

JS: Chinese businesses, both governmental and private, have been on a steep learning curve as far as foreign direct investments are concerned. They have been starting to understand that investing in politically unstable places is fraught with risk. They have also seen that even if a government appears to welcome an investment, the people who actually live in the area need to support the project and benefit from it, or it is likely to face resistance or violent unrest. The idea of community involvement is hard for the Chinese, especially since there isn’t much experience living overseas and dealing with other cultures. I think this growing understanding is a positive development. However, the idea of social and environmental screenings still feels onerous to many Chinese companies, since they are not accustomed to conducting them when they invest within China. We have yet to see whether the new Chinese-led investment banks and aid agencies will erode standards that the World Bank has been forced to adopt after years of criticism.

CD: China may not be a global political or economic power yet – but can it become a global green power and lead the way in clean tech and innovation?

JS: China is a world leader in solar and wind power – and I have confidence that many Chinese are working on innovations that may provide real breakthroughs. But energy is a really problematic area. For example, now that there is more focus on “renewables,” a lot of big hydropower projects are back on the table, including some that activists had hoped would never be built because of their impact on pristine rivers, endemic species, and fragile ecosystems. But yes, we can certainly hope that China will become a global green power – and acknowledge that if it does not, the planet is in trouble.

CD: You write that Buddhist, Daoist and other traditional ideas don’t have a strong resonance among young Chinese today. So where are alternative ways of living and consumption going to come from?

JS: In my experience, some young Chinese people, like young people all over the world, are starting to see themselves as citizens of the world. The world starts to look less like a “realist” zero-sum game between competing nation-states and more like a global community of people whose interests are essentially aligned. That is of course an optimistic picture, and some strong nationalistic and even jingoistic tendencies are also pronounced among young Chinese. But I do see that more Chinese people are questioning a model of development that emphasises the possession of material things. As a result, I’ve seen a return to family farming, even “balcony farming,” an emphasis on organic agriculture, an interest in spirituality and religion, and a quest for a more meaningful life.

CD:  How do you see the US-China relation over green issues evolving?

The US and China have been cooperating on environmental issues for a very long time.  The APEC climate change announcements by Xi Jinping and Obama are only the most obvious expressions of a long standing partnership on environmental issues. Often countries that disagree on many issues can find common cause on the environment – the environment is often the “ping pong diplomacy” of the present day. However, the US can do much more in terms of technology transfer, investment, and helping China to meet its carbon targets. For example, there is a lot of experience in the US with cap-and-trade schemes to use the market to reduce emissions through pollution trading permits. I’m sure that China will benefit from this experience.

Judith Shapiro is a professor of global environmental politics at American University in Washington, DC, and author of the 2001 book Mao’s War Against Nature.